If you haven’t heard the news yet, it’s high time you do! NoMeansNo, the legendary punk band from Victoria BC, have officially announced their retirement after 35 years of touring, recording and entertaining our hearts and ears. This is a very Nostalgic moment for me – and for many others, I am sure – as I can’t even count the times I have seen them live and partied with the band!!! Not to mention that my own band, The Abbie Hoffman Society, had the grand opportunity of touring with them on three occasions, one of which for their famed “Clone the Ramones” tour. It was an amazing experience as we learned so much being on tour with these guys whom we call friends. They have always been so good to us (and the fans were fantastic also)… and man did we have fun! Today, I am sharing two posters from this very Nostalgic time along with an article from the Pitchfork featuring words from Canada’s most famous drummer John Wright and a YouTube video playlist of three of their songs and a short live performance. Thanks for everything guys! 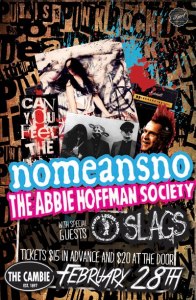 I am a multidisciplinary artist, combining materials and techniques.Living on the sunny shores of Cortes Island ,The West Coast of B.C. Canada. View more posts